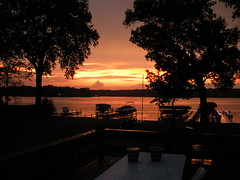 DSCN0433
Originally uploaded by Anya1976
my cousin had her Graduation/birthday party at their lake house yesterday.
that was ... um well an event to put it mildly.
The day started out well we got there at like 3:30 maybe. left later than we wanted but oh well.
When we got there Helen, Chloe, and Emma were on the golfcart and wanted me to go with them. We had literally just pulled up and I wanted to say hello to everyone. So they left and I didn't see them for a long time. I went swimming in the lake. Hung out with my cousin Bryon and his girlfriend Allyson. on this huge raft thing my aunt bought.
Of course we ate. Heard it was going to rain... I was on the phone with a friend and he said that it wouldn't reach us for a couple hours or so so my cousin Caroline and I went back in the water for awhile.
I got out maybe 20 mins before it started to rain. I was sitting on the dock with Bryon, Caroline, and Allyson talking and we felt drops. We ended up going to sit on the boat. Sat out there for a loooong time took some great pics of the sunsetting.
There was some drama won't get into in this post... BUT I am sure I will throw a friends only post in and talk about it.
My Mom's dad was there (no this wasn't cause for the drama) but I didn't talk to him. Honestly I had planned on calling him Mr.M(fill in the rest of his last name) instead of calling him grandpa.
But he didn't say anything to me and I didn't say anything to him. I walked past him quite a few times.

The pic here was taken from the deck. my aunt's dock is the one on the right with the lights on it.

First Aid
Have you ever performed CPR, mouth-to-mouth resuscitation, or the Heimleich maneuver on someone in an emergency?
Reply 200
yes i have. My Grandma Simon. when i was staying with her during the day she started choking and i had to heimleich her.
Collapse